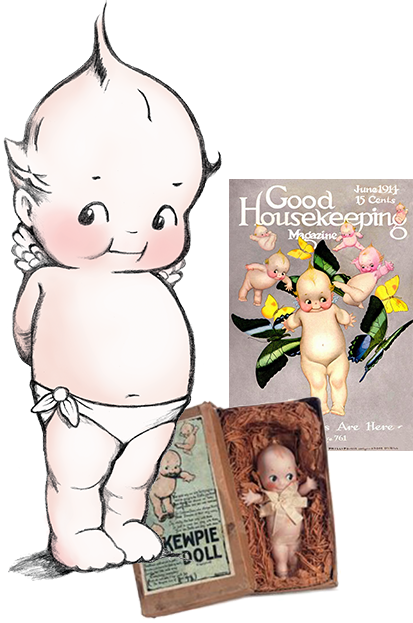 Once Upon A Time... a young lady named Rose O'Neill created the Kewpies.  Pictures, stories and poems about them first appeared in Good Housekeeping in 1909.  Overnight, Kewpies and Kewpie® stories became a cultural sensation that lasted for years.

What Is A Kewpie®?

(kewpie doll) a type of doll characterized by a large head, big eyes, chubby cheeks, and a curl or topknot on top of its head. 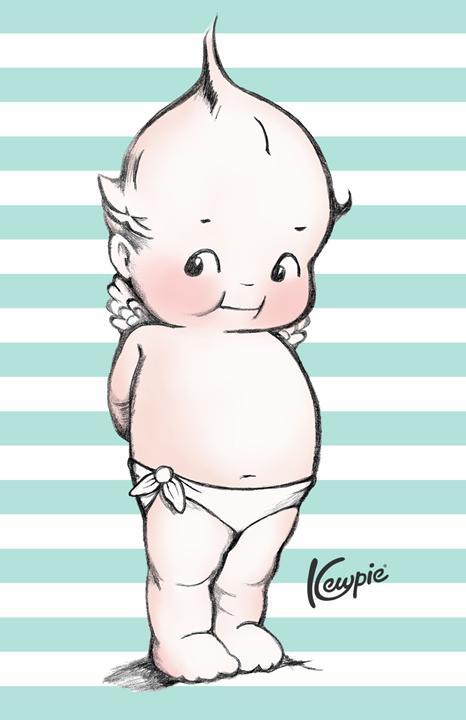 Illustrator Rose O’Neill described a Kewpie® as the baby form of a Cupid – a sort of little round fairy whose one idea is to teach people to be merry and kind at the same time.

Whereas Cupid gets himself in trouble, Kewpies get themselves out of trouble, always searching for ways to make the world a better and funnier place.

In fact, Rose was first inspired for the Kewpie character by her love for her family and more specifically influenced by two younger brothers, Edward and Clink (Clarence).  The beginnings of the Kewpie are apparent in a 1903 sketch and in her autobiography, edited by Miriam Formank Brunell, in which Rose recalls the death of her younger brother Edward.

"I vividly remember the death of little Edward.  I was fourteen years old and he had lived a little more than two years.  But he had lived thoroughly.  He had completed the perfect record of the angelic thing.  And he had fastened on my back my heavy ministry - that light weight that bears me down.  He had marked me with the attributes of the Tender Clown - the small, the Heavenly Buffoon - and had branded me with what became the Kewpie with all that great store the little 'Clink' added later."

"In illustrating love-stories, I had a way of making decorative head and tail pieces with Cupids.  Edward Bok of the Ladies' Home Journal cut out a number of these and sent them to me.  He asked me if I could make a series of the little creatures and said that he would find someone to make accompanying verses.  I replied that I would make the verses up myself and wrote him an illustrated letter in which I created the character of the Kewpie - a benevolent elf who did good deeds in a funny way.  I invented the name for little Cupid, spelling it with a K because it seemed funnier.  Kewpie short for cupid."

The Anatomy Of Adorable 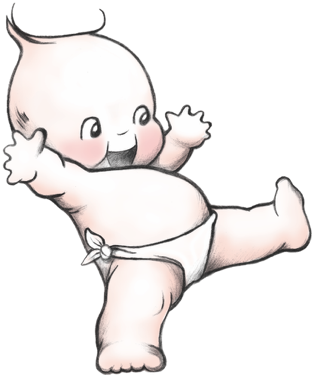 Often imitated, never duplicated due
to these unique combined attributes:

Wide side glancing eyes
Distictive Kewpie® facial expressions
A Top Knot of hair
Side tufts of hair above each ear
A similar tuft of hair at the base of the headline on the back side
The star fish right hand.

Many Kewpies, Many Personalities

Rose O’Neill created many versions of Kewpie® so that they could have relevance to children just as all modern era character properties are developed today. In addition, many words relating to the source word Kewpie® were used such as the word “Kewpieville”.  This let children know that the Kewpies had their own fantasy world in which they lived.